Award winning cellist Carmine Miranda and violinist Boris Abramov’s new Navona release Mozart / Beethoven: Violin and Cello Duets is an intimate gem of delightful chamber music from t he Classical Period. Drawn from various duos by Beethoven and Mozart, this album is substantive, and showcases a wide stylistic breadth of late eighteenth century German instrumental music, from the sumptuous levity of the divertimento, to the full brilliance of sonata form. In this recording both performers balance concepts of classical performance, musical research and virtuosic dexterity combined with a high-definition audio engineering in order to create the most realistic sound and definitive version of these works. The pieces in this recording have never been paired together. Their unique styles, and carefully researched interpretations by Miranda and Abramov, create exceptional recordings with equal parts nuance and bravado.

The Beethoven arrangements come from a set for Clarinet and Bassoon composed without an opus number in the early 1790s. While Beethoven did not officially add these pieces to his catalog, the works rapidly became popular, and at least two widely distributed editions of the duos were published within his lifetime. Dating from the earliest part of Beethoven’s career, these pieces are consummately Classical, without showing much of the Romantic sturm und drang that define the two later stages of the composer’s oeuvre. With that said, the duos are utterly charming and dominated by graceful melodies and straightforward forms. They epitomize late eighteenth century chamber music.

The two Mozart duos, originally composed for violin and viola, are a “better-known” treasure among violinists and violists, particularly in their approach to the era’s most important musical structure: sonata form. Indeed, both duos open with the same structural premise Mozart, Haydn, and their contemporaries more commonly used at the beginning of symphonies, piano sonatas, and string quartets. In particular, the first movement of the Duo for Violin and Viola in B-flat Major, K. 424 is remarkable, and it may be one of Mozart’s most cleverly composed instances of sonata form.

The movement is wry and, frankly, humorous – a characteristic most easily heard in the exposition’s closing section and the very beginning of the development. Here, Mozart uses unusually long rests and unexpected elisions to interrupt and blur the straightforward demarcations between phrases, leading the listener to smile in surprise. This kind of compositional sarcasm is more commonly associated with the music of Joseph Haydn than Mozart, and – perhaps because Mozart composed this duo to complete a commission begun by Haydn’s brother, Michael – there are numerous harmonic and structural clues that suggest Mozart attempts to reference Haydn in the duo’s first movement. 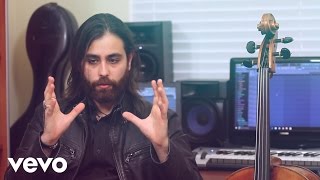 BEHIND THE SCENES: SCHUMANN | DVOŘÁK: CONCERTI FOR CELLO & ORCHESTRA: THE DVOŘÁK CELLO CONCERTO

WELCOME TO THE NEW VEVO CHANNEL